5 Tax Planning Steps to Take Before the Year Ends

As we enter the final quarter of 2017 (yes the last three months of the year are here), I am sure you feel the same way we do and cannot believe how fast this year has gone by. Keep in mind that the year is not going to slow down and there are several things you should be thinking about as the final days of the year pass us.

We are going to provide you with five things that you should review in the next couple of weeks to ensure that you are prepared for 2018 and filing your 2017 tax returns.

1) Take caution before making investments in a non-qualified (or non-retirement) account(s). This time of year mutual funds begin to announce their plans to distribute capital gains to their shareholders. The last thing you want to do is make a significant investment in a mutual fund and then get hit with large capital gains after only owning the fund for a few weeks. Does this mean you should or should not invest in these types of accounts until January 1st? No, you can certainly invest between now and the end of the year, but you must be aware of the potential consequences. In addition, there are strategies that you can use to invest your funds now and avoid these capital gains distributions before the end of the year.

2) Review your non-qualified account mentioned above. Take note of your year-to-date capital gains or losses due to sales of investments over the course of the year. You may want to sell some of the investments that are not performing well in your portfolio (take the loss) to offset gains you currently have in your account year-to-date. Another option may be to take some gains in your account if you have a net loss for the year thus far. This type of review will allow you to put yourself in a better tax position for the year.

5) Stay alert.....Tax reform is being spoken about on almost a daily basis at this point. There have been debates as to whether this reform will go through in 2017, retroactive back to January 1, 2017, or will we see it passed in 2018. It is important to stay alert because we do not know what tax reform will look like or what it will mean to you because it is so fluid at the moment. You will want to know what it means for you when (or if) it is passed. Pay attention because this may have an impact on your tax obligation for 2017.

Mitlin Financial, Inc. believes that working with a team is an important part of getting the best outcomes for our clients. It is important that the strategies above are reviewed and evaluated for your own personal facts and circumstances. Being that we do not provide tax advice, we welcome the opportunity to work with your CPA to review your situation and make sure that you are doing everything you should be in order to be prepared for your 2017 tax filing and mitigating the tax impact from your investments as well. Be sure to contact us regarding your own situation as we enter the end of the year. Feel free to give us a call at (844) 4-MITLIN x12 and allow Mitlin Financial, Inc. to facilitate your financial future!

Disclaimer: This article represents the opinion of Mitlin Financial Inc. It should not be construed as providing investment, legal and/or tax advice.

Mitlin Financial's President, Lawrence Sprung, and his family are proud to announce that the Keith Milano Memorial Fund has made a financial commitment to the American Foundation For Suicide Prevention's Project 2025.  As many of you know, Keith was Larry's brother in law and this is a cause he has been very passionate about.  You will also see that the Sprung family has also made a personal donation along with the donation from the fund.  We offer a huge Thank You to everyone that has helped us make the donation and raise awareness for this important cause. Here is a copy of the full press release:

Goal to Reduce the Annual Suicide Rate 20 Percent by 2025

“We knew when we launched Project 2025 that it would take generous donations like this one from the Keith Milano Memorial Fund to meet our bold goal of reducing the suicide rate. It is for people like Keith, and those he left behind, that we continue our work – by investing in Project 2025 the Sprung family is contributing to helping us save lives and bring hope to those affected by suicide,” said Robert Gebbia, AFSP CEO.

Keith Milano grew up on Long Island where he attended Newfield High School. He went on to the University of Buffalo, and then to Stony Brook University where he graduated with a bachelor’s degree in Geology. After graduation, he worked as a hydrogeologist for EnviroTrac. Denise Milano Sprung, Keith’s older sister by three years, also attended Newfield High School and the University of Buffalo. Denise and her husband Larry run the Keith Milano Memorial Fund in honor of her younger brother. The Sprung family also made a personal donation to Project 2025 and have been generous contributors to AFSP for many years.

Launched in October 2015, Project 2025 uses a dynamic systems model approach based on what the evidence tells us about suicide. The model has already revealed four areas for critical action including: (1) firearms and suicide prevention, (2) healthcare systems, (3) emergency departments, and (4) justice systems. Through collaborating with other organizations, accrediting bodies, professional associations, and leaders in other industry sectors, AFSP is focusing its prevention efforts on the kinds of programs, policies and interventions in these four areas that will save the most lives in the shortest amount of time.

About the Keith Milano Memorial Fund

The Keith Milano Memorial Fund was established to help raise awareness about the devastating deadly disease that is mental illness. Keith’s spirit and laughter is kept alive through our efforts to increase awareness about mental illness and to raise money for education and imperative research. Keith often struggled with society’s perception of mental illness. Our hope is that by having the strength to say that Keith was “Bipolar” we can strip away the stigma and help others to be more open about their disease.

The American Foundation for Suicide Prevention is dedicated to saving lives and bringing hope to those affected by suicide. AFSP creates a culture that’s smart about mental health through education and community programs, develops suicide prevention through research and advocacy, and provides support for those affected by suicide. Led by CEO Robert Gebbia and headquartered in New York, and with a public policy office in Washington, D.C., AFSP has local chapters in all 50 states with programs and events nationwide. AFSP celebrates 30 years of service to the suicide prevention movement. Learn more about AFSP in its latest Annual Report, and join the conversation on suicide prevention by following AFSP on Facebook, Twitter, Instagram, and YouTube.

We are pleased to annouce that the Mitlin Financial Blog was selected as one of the "100 Best Personal Finance and Investing Blogs for Beginners" by Insider Monkey.

Here is a preview of our selection and you can view the entire list here: http://mitlin.us/InsiderMonkey

Mitlin Financial blog isn’t really dedicated to absolute beginners in the world of finance, but their articles do have a dose of insight only an insider can provide and are worth reading. 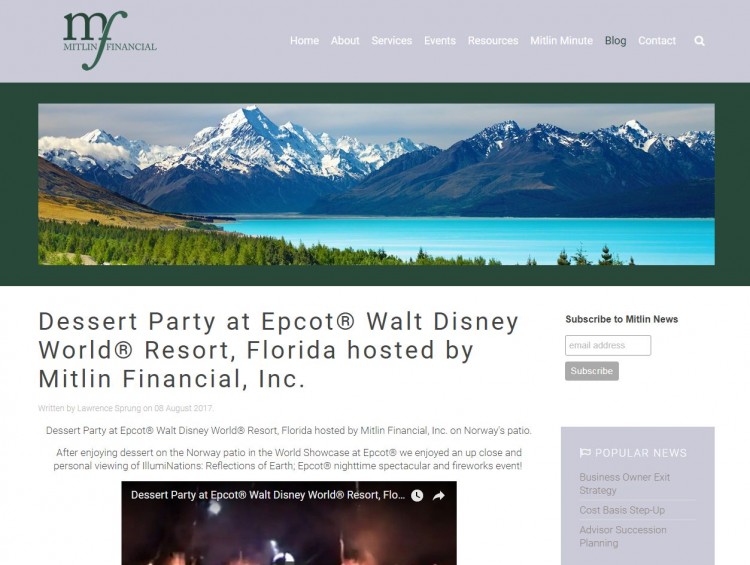 It is a tremendous accomplishment to be named and it is something we take great pride in.  Please be sure to share our blog with others that you may know that have an interest in their Financial Future!

Disclaimer: This article represents the opinion of Mitlin Financial Inc. It should not be construed as providing investment, legal and/or tax advice.

Written by Lawrence Sprung on 12 September 2017.

To Commemorate National Suicide Prevention Week, we are Raffling off Two Tickets to the Big Apple Author event being held on October 14, 2017 at the New York Hilton Midtown in New York City!

For each $10 donation made directly to the Keith Milano Memorial Fund benefiting the American Foundation for Suicide Prevention you will receive 1 entry.
Make your Donation Here: http://mitlin.us/KMMF
Upon completion of your donation please forward the email confirmation for your donation to: This email address is being protected from spambots. You need JavaScript enabled to view it.
The Winner will be chosen on Thursday, September 21st.
Mitlin is proud to be a sponsor of the Big Apple Author event which has a lineup of amazing authors, http://bigappleauthorevent.com!
Keith Milano Memorial Fund
140 Adams Ave Suite B-12
Hauppauge NY 11788
http://www.keithmilano.org
https://www.facebook.com/keithamilano
Twitter: @MilanoFund
The Keith Milano Memorial Fund was established to help raise awareness about the devastating and deadly disease that is mental illness.
Keith’s spirit and laughter is kept alive through our efforts to increase awareness about mental illness and to raise money for education and imperative research. Keith often struggled with society’s perception of mental illness. Our hope is that by having the strength to say that Keith was “Bipolar” we can strip away the stigma and help others to be more open about their disease.http://www.keithmilano.org/
If you would like to hear from me personally about this event and Keith’s Fund you can listen to this video: https://vimeo.com/148760740
The Keith Milano Memorial Fund benefits the American Foundation for Suicide Prevention (AFSP).  http://www.afsp.org
AFSP is the only national not-for-profit organization exclusively dedicated to understanding and preventing suicide through research and education, and to reaching out to people with mood disorders and those affected by suicide. AFSP is a fully accredited 501(c)(3) tax-exempt organization incorporated in the state of Delaware with primary offices in New York City. Federal tax ID # is 13-3393329.
AFSP’s Combined Federal Campaign (CFC) number is 10545. Donations to AFSP are tax deductible.

Mitlin Financial Night at The Ducks

Written by Lawrence Sprung on 11 September 2017.

Mitlin Financial, Inc. had a great night with the Long Island Ducks.  It was great night of baseball, food and fireworks!  Big thank you to the Ducks for making it a great evening.

Here are some shots from the event.....

RT @Lawrence_Sprung: via @budgetsmadeeasy special guest @SeanMoneyandTax with #21 Simple Tips For The Average Family to Save On Their Tax…

RT @Lawrence_Sprung: via @budgetsmadeeasy special guest @SeanMoneyandTax with #21 Simple Tips For The Average Family to Save On Their Tax…

RT @Lawrence_Sprung: Tax professionals and financial advisors are cut from the same cloth. In many instances, we are both type A personalit…